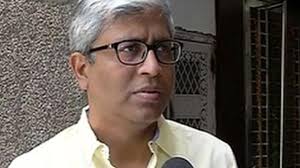 New Delhi: The Aam Aadmi Party and Congress are likely to fight the upcoming Lok Sabha polls in Delhi and maybe even in Punjab, together, former journalist-turned-AAP leader-turned-journalist-again Ashutosh has written for a news portal he co-founded.

In a piece that Ashutosh wrote for satyahindi.com, published on January 1, he says that between AAP and Congress, it was Kejriwal who proposed the idea of the alliance first.

‘The truth is that Kejriwal decides what happens in AAP. And Kejriwal wants an alliance with Congress. He has been pushing for it for the past one year. Some other parties have also worked as communication channels for AAP and Congress.”

He adds that a big impediment to this alliance was Congress’ Delhi unit. It is in this light that another piece published on Friday in the same portal analyses Delhi Congress chief – Ajay Maken’s resignation.

“Congress’ Delhi unit kept telling the party high command that it shouldn’t get into alliance with AAP that is continually becoming unpopular in the capital.”

Rumours of a pre-LS poll alliance as an offer from AAP to Congress had started doing rounds sometime last year. Maken had tweeted in June last year – ‘On “so called” offer of AAP to Congress for 3 seats, look at my reply to Kejriwal! When the people of Delhi are continuously rejecting Kejriwal Govt, why should we come to their rescue? After all, Kejriwal with team Anna supported by RSS, helped in creating this monster of Modi!’

Ashutosh further writes that the alliance could help AAP-Congress combine win all the seven seats in Delhi, whereas failure to join forces will split votes that are common to both parties – Muslims, Dalits, jhuggi dwellers – allowing BJP to win all the seats again.

He adds that once the deal is inked in Delhi, it will also pave way for a similar alliance in the 13 seats of Punjab, ruled by Congress with AAP as main opposition.

With this, the AAP-Congress combine will be able to mount a huge challenge to BJP in 20 seats in the two states where both the parties received a drubbing by BJP in ’14 LS polls. Possibility of similar understanding in Haryana is also not ruled out.

Ashutosh has also argued that the alliance may be a bitter pill for the state Congress leadership, who fear that their leaders may end up joining AAP or turning renegades,

Both parties have an experience of being together, if only in the short-lived 49 day government, and this will help them walk together again, he says.