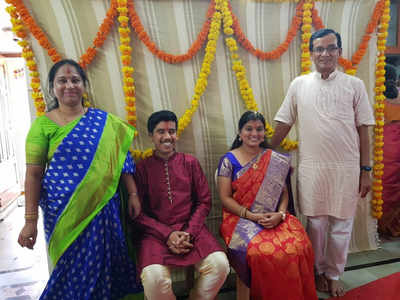 In the times when marriage ceremonies are a platform to display the wealth and status symbol, a marriage of simplicity seems to be an exception. But an IAS officer in Andhra Pradesh is determined to do the exceptional.

Patnala Basanth Kumar, Commissioner, Visakhapatnam Metropolitan Region Development Authority (VMRDA) will be spending just Rs 36,000 on his son’s marriage, which is scheduled to be held in Visakhapatnam on February 10.

The families of the bride and the groom will bear an expenditure of Rs 18,000 each on the marriage ceremony, including the lunch arrangements for the guests. Andhra Pradesh and Telangana Governor ESL Narasimhan will bless the couple at the ceremony on Friday.

Basanth Kumar, who was promoted to IAS cadre in 2012, had earlier served as Officer on Special Duty and Joint Secretary to Governor Narasimhan.

People are appreciating Basanth Kumar for setting an example in the times when the extravaganza at weddings has become a norm.