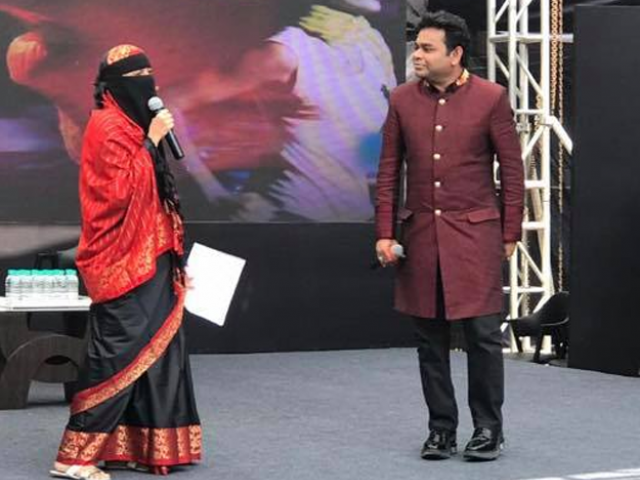 It is 2019 and here we are, arguing yet another Muslim woman’s right to wear a burqa. This time, the woman drawing the nation’s ire is none other than Oscar-winning music maestro AR Rahman’s daughter Khatija Rahman.

Rahman recently marked ten years of winning the Oscar for best music direction for the Danny Boyle directed Slumdog Millionnaire. The musical genius celebrated the occasion with an event in Mumbai’s Dharavi, the biggest slum in the world on Monday. And his daughter Khatija went up on stage to commemorate him. Little did she realise that the simple act of supporting her father would land her and the musician in the eye of a hate campaign.

All she had to do was wear a burqa. As soon as the photos of the concert made it to social media, Rahman was targeted by alleged proponents of freedom of choice and expression. They said it was cruel of him to enforce his religious beliefs on his daughter, that it was unfair of him to “force” her to wear a burqa.

People also called out Rahman for having alleged double standards. “Sir, I thought your religion was music. I was wrong,” a Twitter user wrote to Rahman.

Both Rahman and Khatija have responded strongly to the hate. Rahman posted a photo of his daughters Kahtija and Rahima along with his wife Saira Bano. The three are wearing different attires and posing with Nita Ambani. The photo was posted with the hashtag #FreedomTochoose.

Khatija also took to social media to defend her father’s position. She claimed that her religious choices were her own and what she wore was also solely her decision and not her father’s. “There were certain comments which said that this attire is being forced by my dad and that he has double standards. I would like to say that the attire I wear or the choices I make in my life does not have anything to do with my parents,” Khatija wrote in a Facebook post.

“The veil has been my personal choice with complete acceptance and honour. I’m a sane, mature adult who knows to make my choices in life. Any human being has a choice to wear or do what he/she wants and that’s what I’ve been doing,” she wrote. She concluded by requesting people to not make snap judgments about situations before first being aware of all its facets.