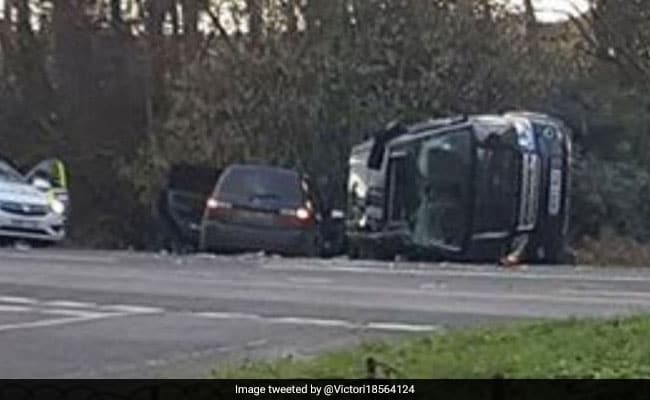 Queen Elizabeth’s 97-year-old husband Prince Philip escaped uninjured from a car crash while driving on Thursday near the Sandringham estate in eastern England.

A nine-month-old boy in the other car was uninjured. The driver, a 28-year-old woman, had cuts while a 45-year-old female passenger broke her wrist.

Witness Roy Warne said the duke asked about their welfare after the crash.

A Palace spokesperson said the duke’s hospital visit confirmed he had “no injuries of concern”.

Mr Warne was driving home when he saw the car roll and end up on the other side of the road.

He said the duke was “obviously shaken” but managed to stand up and ask how the others involved in the crash were, he said.

Mr Warne said “I saw it careering, tumbling across the road and ending up on the other side.

“It would take a massive force [to have done that].”

Famous for verbal gaffes but generally regarded with wry affection by Britons, Philip married Elizabeth in 1947 and has been by his wife’s side throughout her long reign.

Since retiring from official solo duties in 2017, he has appeared in public alongside the Queen and other members of the royal family at events and church services.

He had successful hip replacement surgery last year. The former naval officer did not accompany the Queen to a church service on Christmas Day last month though a royal source said he was in good health.

Kate Williams, a royal historian, said it would be a blow to Philip if the incident ended his driving days. “He really loves driving and takes a great pleasure in it and were he not allowed to drive he would find that quite painful,” she said.

There is no legal age in Britain to stop driving, but after 70 people must renew their licence every three years.

The very next day a new land rover was seen lowered from a truck at the prince philip house, becase he is a passionate about his driving. Yet to hang up his boots.