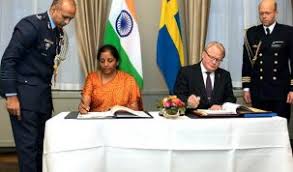 India concluded defence cooperation and security protection agreements with Germany and Sweden during the ongoing visit of Defence Minister Nirmala Sitharaman there.

“The agreement that Nirmala Sitharaman and I signed today is an important step in implementing the action plan on deeper cooperation with India,” Peter Hultqvist, Swedish Minister for Defence said after signing the security protection agreement between the two countries.

The agreement will enable both the countries to share classified information with each other, a Swedish Embassy release said.

India and Sweden have had a memorandum of understanding on cooperation in the area of defence since 2009.
Germany visit

Earlier in Germany on February 12 to 13, Ms. Sitharaman met her counterpart Dr. Ursula von der Leyen and signed an implementing arrangement on enhanced defence and defence industry cooperation to strengthen military to military engagement as well as defence industry and research and development linkages.

Both Germany and Sweden are important suppliers of defence equipment to India and their companies are currently in the race for multi-billion tenders to supply submarines and fighter aircraft.