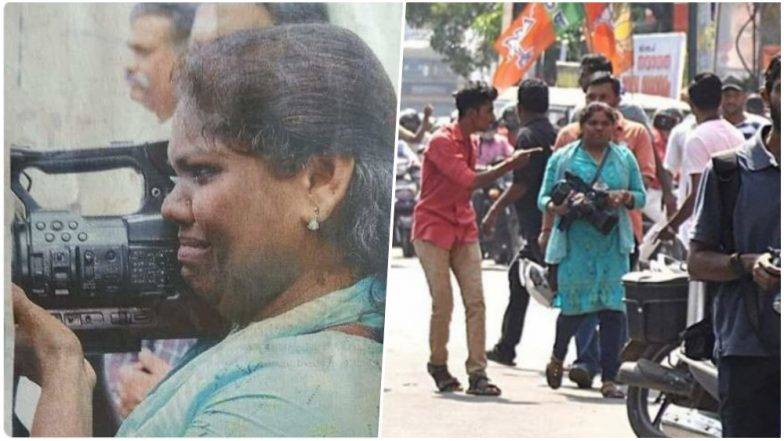 Shajila was heckled, abused and threatened with dire consequences but she kept her camera rolling. She had been assigned to get reactions from BJP leaders about Bindu Ammini and Kanakadurga’s historic feat of offering prayers at the Sabarimala shrine.

“I was shocked when I got that unexpected kick on my back. It was the worst experience in my professional career,” Shajila Abdulrahman, a cameraperson who was covering a Sangh parivar protest in Kerala over the entry of two women in Sabarimala temple, says holding back her tears.

On Thursday, she became a social media sensation after Kerala’s Mathrubhumi newspaper published a photo of her continuing to shoot the protest in Thiruvananthapuram on Wednesday even after she was attacked by the agitators.

She was heckled, abused and threatened with dire consequences but her camera had kept rolling. A cameraperson wih Kairali Television, she had been assigned to get reactions from BJP leaders about Bindu Ammini and Kanakadurga’s historic feat of offering prayers at the Sabarimala shrine, becoming the first women under 50 to enter the sanctum sanctorum since the Supreme Court verdict.

The protest she was covering in Thiruvananthapuram, one of many across the state, had been organised against the entry of the two women.

“I didn’t know where that kick came from. It caught me unawares and hurt my back. As I was writhing in pain, the attackers tried to snatch the camera, but I used all my strength to keep hold of it. I injured by neck in the melee,” she recalled.

Shajila, is being treated for back and neck injuries in Thiruvananthapuram, but says she is not afraid of the BJP and would continue covering the party’s protest against the SC verdict.