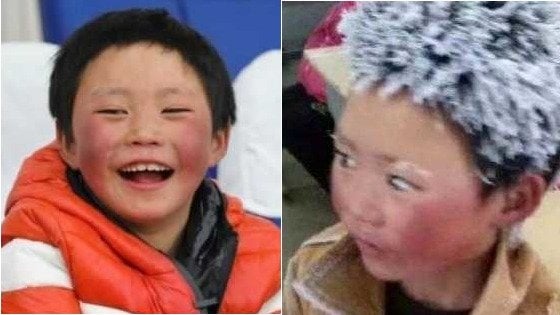 Pictures of a young pupil arriving at school with frozen hair and swollen hands renewed discussion of child poverty in China when they were posted by his teacher in January 2018.

His determination to get to school in such difficult conditions, and excellent performance in class, prompted a wave of sympathy and support online.

Now nine, a lot has changed for Wang in the last 12 months – and he no longer has to trek miles to school in the snow, according to the People’s Daily.

Wang and his family have moved out of the mud hut they shared into a two-storey home just 10 minutes’ walk along a paved road from his school.

“Life is much better,” the boy’s father, Wang Gangkui told the publication.

“Compared with the mud walls and muddy road, we are much better sheltered from the wind and rain.”

Heating facilities have reportedly been installed in classrooms, while a dormitory has been built to house children who live far from the school.

“Wang” is a top student and gets along well with his classmates,” deputy principal Fu Heng is quoted as saying.

“All the attention has made the pupils feel the wonder of the world and their ideas have changed a great deal. The seeds of dreams that one day they will be able to walk away from the mountains have been planted, and they are very hopeful for the future.”

Wang’s dream, however, remains the same. As it was in 2018, he hopes in the future to become a police officer, so he can “catch the bad guys”.