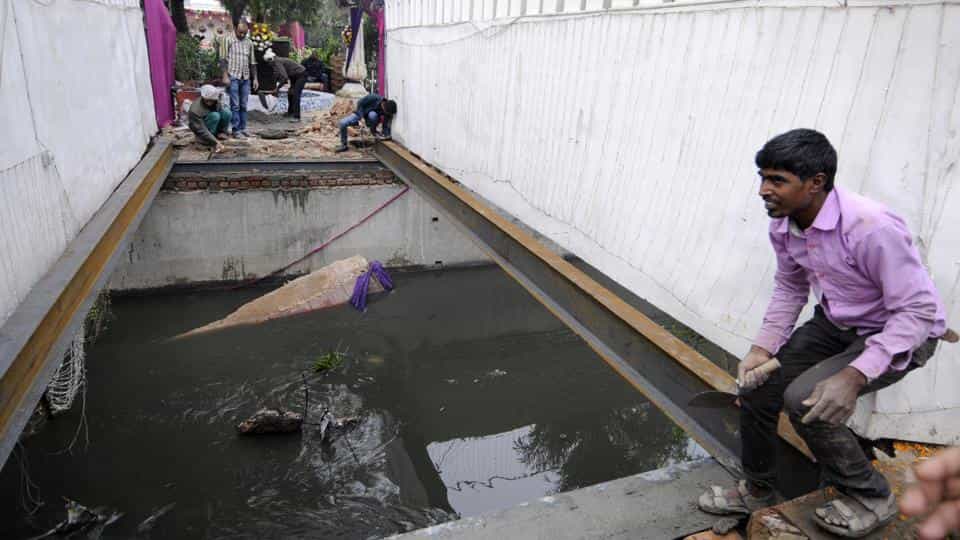 Fifteen persons, part of a wedding procession (baraat), including the groom, fell into a drain when the bridge they were dancing on collapsed in Hoshiyarpur village of Noida’s Sector 52 on Saturday night. Two children were injured.

The incident took place around 9.30pm when 15 persons, including the groom, were dancing on a small bridge that collapsed all of a sudden. The bridge, built over a drain, connected the Olive Garden wedding banquet hall’s gate to its lawn. According to eyewitnesses, the wedding procession had been dancing for over 10 minutes on the bridge.

“We received information around 9.30pm that a bridge had collapsed in Hoshiyarpur village in Sector 52, and over a dozen people had fallen into a drain. Two children, aged below 8 years, were injured and were rushed to a nearby private hospital for medical assistance. No case was registered; both the parties reached an agreement,” Mithilesh Upadhyay, station house officer, Sector 24 police station, said.

A ruckus ensued after the accident and it was only after the banquet hall owner paid ₹3 lakh in cash to the bride’s family that the wedding resumed.The groom was identified as 35-year-old Amit Yadav, a businessman from Indirapuram, Ghaziabad, and the bride was 32-year-old Sonam, a resident of Kondli in Delhi. Sonam’s father Phool Kumar had booked the place for the wedding on February 9.

According to a security guard who was an eyewitness to the incident, the bride’s family was standing at the other end of the bridge to welcome the baraat.

“Nearly 15 baraatis danced for about 10 minutes on the bridge, while the others walked over it to get to the lawn. The baraatis who stopped at the bridge to dance included the groom,” the guard said.

Sumit Yadav, Amit’s younger brother, said that the wedding venue had no other exit than the collapsed bridge.

“The bride’s father and mother were standing at the other end of the bridge to welcome the groom. It was quite embarrassing for us. Many of us lost our mobile phones and jewellery when we fell into the drain. The place had no emergency or alternate exit,” Sumit said.

OP Sharma, the owner of Olive Garden, said that the bridge’s collapse was an unfortunate accident.

“We have been in business for the past 15 years; this is the first time that such an incident took place. We apologised and returned every penny we took from the bride’s side. The wedding ceremony resumed after the accident,” Sharma said.

The bride’s father wrote to the wedding organisers stating that he did not wish to file a complaint.

“Luckily, no one was grievously injured in the accident, and to compensate for our loss, the organisers paid us ₹3 lakh. We do not wish to file any complaint,” he said.