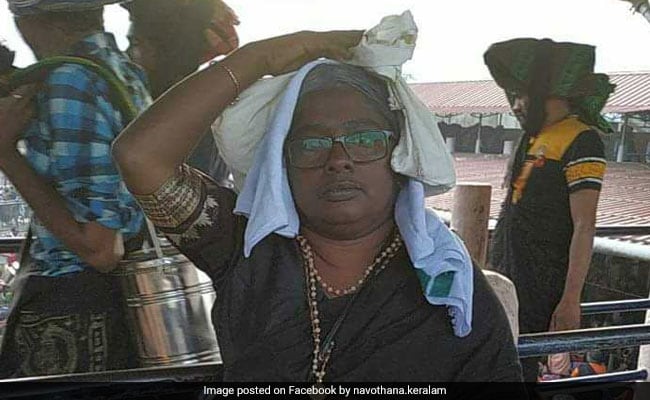 A 36-year-old activist from Kerala has claimed she entered the Sabarimala temple on Tuesday. A Facebook group called ‘Renaissance Kerala Towards Sabarimala’ has posted a series of videos and photos of the activist, Manju, to prove the claim.

In one of the videos, Manju herself is heard saying, “I entered Sabarimala on 8th January. I travelled from Thrissur by bus and faced no resistance as a young woman devotee, even from other devotees. I was in the temple for around two hours, for various rituals”.

According to sources, Manju did not seek police support to enter the temple. She had attempted to trek to the shrine in October as well, but on reaching Pamba, she says she was dissuaded by the police citing heavy rainfall.

The pictures, which have been put up in the same Facebook group, show the woman having dyed her hair grey in order to appear elderly, perhaps in an attempt to avoid any protests or attack on her.

The state government has not given out any number on how many women between the age group of 10-50 years have entered Sabarimala. “We don’t have any specific numbers as of now. Will have to look into it”, Chief Minister Pinarayi Vijayan told media, when he was asked about some reports stating around 10 young women have entered Sabarimala temple, since the beginning of this year.

Two women, Bindu and Kannaka Durga are still in living in hiding, in an undisclosed location, after they emerged as the first women in their early forties to have entered Sabarimala.

Speaking to NDTV exclusively earlier, Bindu had said, “I believe it is our constitutional right to enter Sabarimala and we exercised our right as women.”

“My family does not support my entry into Sabarimala but I am a devotee. I am glad that we both have been able to make it easier for many other young women who would want to enter Sabarimala. It is about devotion, and also about women’s right to pray”, Kanakka Durga had told NDTV.

The entry of these two women had sparked protests and calls for a strike by conservative Hindu groups outraged by their visit.

The Supreme Court in September ordered the lifting of the ban on women or girls of menstruating age from entering the temple, which draws millions of worshipers a year.
But the temple refused to abide by the ruling and subsequent attempts by women to visit it had been blocked by thousands of devotees.

The hill temple, which pays homage to the celibate god Ayyappan and draws millions of worshippers a year, is one of a few in India that bar entry to girls and women between the ages of 10 and 50, saying that menstruating women are impure.