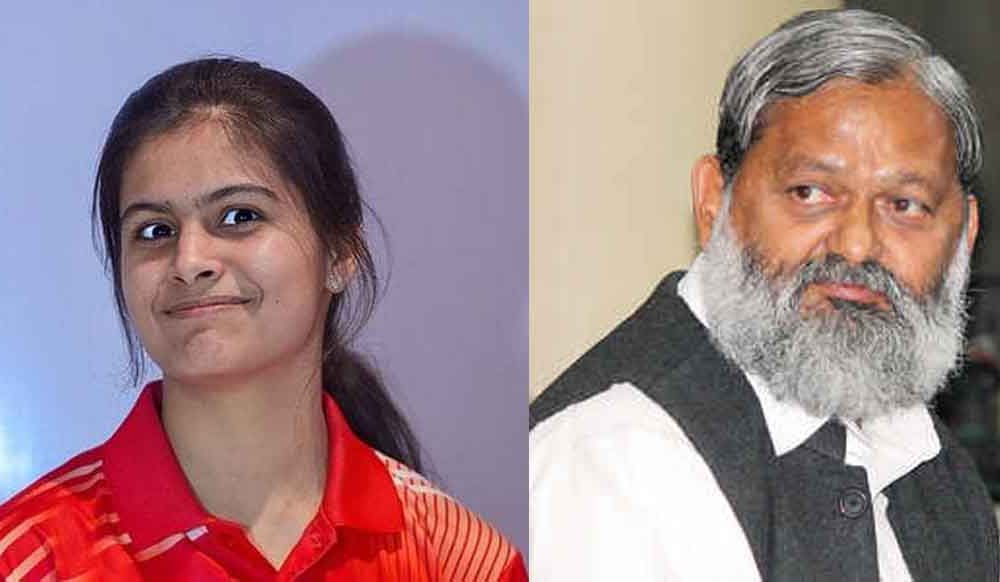 Haryana sports minister Anil Vij hit out at Youth Olympics Gold Medalist and ace shooter Manu Bhaker after the latter reminded the minister of a Rs 2 crore cash award promise, which is yet to be fulfilled.

However, he soon faced flak for his comments and for lashing out at a Youth Olympics gold medalist.

The minister had promised cash prize worth Rs 2 crore in a tweet after the shooting sensation won the top prize at Youth Olympics held in October.

Bhaker, in a tweet on January 3, claimed that “someone” in Haryana is “playing with Youth Olympics games cash prize”.

The teen shooter posted screenshots of Vij’s tweet in which he had promised her cash award to the tune of Rs 2 crore on behalf of the state government. “Sir Please confirm if it is correct… Or just Jumla (sic),” Bhaker wrote on Twitter.

Some one in Haryana is really playing with Youth Olympic games cash prize!!!!! @narendramodi @mlkhattar @anilvijminister @Ra_THORe @AshokKhemka_IAS … Is it really for encouraging or disheartening players. which one is correct… pic.twitter.com/adIsfttId7

Responding to Bhaker, the sports minister tweeted on January 5 that Bhaker should have “first confirmed it from the Sports Deptt. before going to public domain”.
“It is disgusting to denounce a State Govt which is giving highest awards in the Country,” Vij wrote in his tweet, advising Bhaker to “focus on her game.”

Manu Bhaker should have first confirmed it from the Sports Deptt. before going to public domain. It is disgusting to denounce a State Govt which is giving highest awards in the Country. Bhaker will will will get 2 crores as tweated by me and as per notification at that time.

Haryana Chief Minister Manohar Lal Khattar had later said Bhaker will get the reward money “as per rules of the department”, adding that “tweeting over it is not good”.

Hours after his tweets, Vij stated that the reward money will be disbursed “possibly” in January.

As per the state government’s changed policy, which came into effect before the Youth Olympics, Rs 2 crore was marked for the gold medallists, Rs 1.25 crore for silver medallists and Rs 80 lakh for the bronze winners. Before that, the medallists would get Rs 10 lakh, Rs 7.5 lakh and Rs 5 lakh respectively.

The government, however, again revised its policy last December and brought the amount down to Rs 1 crore for gold, Rs 65 lakh for silver and Rs 40 lakh for the bronze medallists.

“Far from motivating sportspersons, such moves will break their morale. She is yet to get the promised cash award and now they have revised the policy again. I really hope enough thought is given before they finalise something. Otherwise, it can be detrimental to an athlete’s career,” Ram Kishan said.

Meanwhile, the President of the Indian Olympic Association, Narinder Dhruv Batra, backed Bhaker, stating that social media is the best way to handle such situations.

“I have dealt with ministries and these babus (bureaucrats) a lot, you never reach anywhere when dealing with them. I think she (Manu Bhaker) did right, social media is the right way to handle it. It’s high time govt fulfills its commitment,” Batra told news agency ANI.