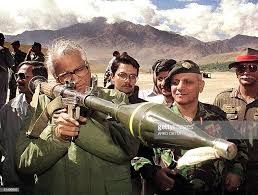 He was suffering from Alzheimer’s and had been out of the limelight for many years. He had recently contracted swine flu and died on Tuesday, his long-time associate Jaya Jaitly said.

He will also be known as the man who threw out Coca-Cola and IBM from India when he was the industry minister in the late 1970s.

Known to be honest and forthright, Mr Fernandes was often described as a rebel who fought for the rights of the poor people and low-paid workers.

In his early years, he wanted to become a Catholic priest and joined a seminary in the southern city of Mangalore at the age of 16. But two years later, he quit, disillusioned by “the hypocrisy of the church”, and moved to Mumbai (then Bombay) in search of work.

It was there that he became involved with trade unions and the socialist movement, and regularly organised protests and strikes in the 1950s and 60s.

The tall, dark, handsome young man, dressed in clothes made from homespun Khadi material, won people over with his brilliant oratory.

In the 1967 election, he defeated senior Congress leader SK Patil, earning the sobriquet “George the giant killer”.
‘Wanted man on the run’

Although he was regarded a hero by the poor masses whose rights he fought for, his trade union activities often put him on the wrong side of the law.

In Mumbai, he led the taxi drivers’ union and was jailed several times for participating in protests and shutdowns that disrupted life.

As head of the railway employees’s union in 1974, he called on its 1.4 million workforce to strike and brought the service to a halt for days.

Thousands of protesters, including Mr Fernandes, were arrested and jailed by Mrs Gandhi’s government.

But his most shining moments came after Mrs Gandhi declared the state of emergency in June 1975.

As most prominent political leaders were jailed on flimsy charges, Mr Fernandes became a “most wanted man on the run” and managed to evade arrest for a year, disguising himself first as a fisherman and later as a turbaned Sikh.

He was arrested in June 1976 in Kolkata (then Calcutta) and flown to Delhi where he was lodged in Tihar jail.

He was brought to court handcuffed and in chains and was charged with attempting to topple the government by force and conspiracy. The case against him was dubbed the “Baroda Dynamite Conspiracy” and he was accused of using explosives to blow up government establishments and railway tracks.

In 1977, when parliamentary elections were held, Mr Fernandes stood for election from inside jail and won with a massive majority.

Once out of jail, he was appointed India’s industry minister in then prime minister Morarji Desai’s government.

It was at that time that he forced Coca-Cola and IBM to quit India after they refused to dilute their stake in their local partners.

Although IBM resumed business with Indian firms a couple of years later and returned to the country in 1992, Coca-Cola took two decades to return.

Despite being a life-long campaigner against nuclear weapons, he supported and oversaw India’s nuclear tests in 1998, saying they were necessary to ensure the country’s security.

He also oversaw the 1999 conflict with Pakistan on the border in Kargil.

During his stint, Mr Fernandes visited soldiers posted in the Siachen glacier several times and won widespread support among them because of his efforts to improve their working conditions.

He resigned in 2004 after his associate Jaya Jaitly was named in an arms bribery scandal, but was later cleared of any wrongdoing by two inquiry commissions.

Mr Fernandes last served in parliament in the Rajya Sabha, the upper house, from 2009 to 2010.