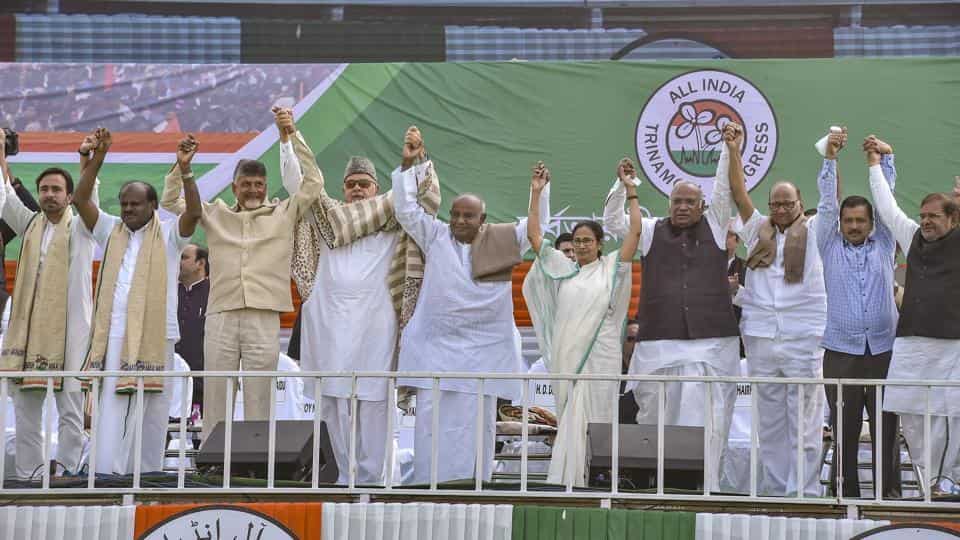 A slew of leaders descended in Kolkata Saturday to attend Trinamool Congress chief Mamata Banerjee’s ‘United India Rally’, a platform to showcase a united front against the BJP ahead of the 2019 Lok Sabha elections.
Advertising

Leaders of several opposition parties graced the event, which saw Mamata Banerjee stating that the PM Modi’s government has passed its expiry date. Similar to how medicines have expiry dates, the time for Mamata government to leave has come. Uplifting West Bengal’s role during the freedom struggle, she said, “Bengal has always shown the way forward and it continues to do so. So many scandalous things have happened in the country and you should see the amount of money the country had five years ago and what it has now.”

The first meeting of the Grand Alliance has been organised in Kolkata. The main task before us is how we should move forward. I have heard all the senior leaders speak. Our time is very short, we have only two months. The only issue before us is how all of us will come together; what our future is. It is a herculean task for all of us to forget our differences and come together.

Using all machinery, they (the BJP) are going to create an atmosphere of fear. Instead of building a strong nation, he (Modi) wants to destroy the secular system of the nation. This meeting is a clear indication that the people want a response. But we have to work out how to give good governance without any hindrance. We need to build confidence in the people that a coalition will last five years.

“This is not about removing one man from power. We have come together to defeat an ideology. Today there isn’t one democratic institution that the current dispensation hasn’t destroyed. The country’s economy is in doldrums; this is the first government that plays around and exaggerates facts and figures. You all know what the ground reality is and that the government wants to divide society and country.”

No other government has told so many lies. Never before were institutions undermined in this manner. Not one institution is left which has not been destroyed by the current government at the centre.