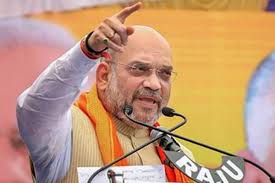 After repeated proposals to stitch together an alliance with the Shiv Sena, the Bharatiya Janata Party (BJP) on Sunday said it would defeat the Sena hands down in Maharashtra if the party does not enter into an alliance before the 2019 Lok Sabha elections.

The BJP’s national president Amit Shah and Maharashtra chief minister Devendra Fadnavis addressed a meeting of booth-level workers from Latur, Nanded, Osmanabad and Hingoli in Latur city, with Fadnavis setting his party workers a target of winning 40 of the state’s 48 Lok Sabha seats.

The BJP has openly expressed its desire to mend ties with Sena and forge an alliance, however, Sena leaders said no BJP leaders have met the Sena leadership. The Sena and BJP had contested the 2014 Lok Sabha polls as allies, but split at the time of Assembly elections. The Sena joined the state government later. The Sena has been critical of BJP, and leaders of the Uddhav Thackeray-led party have often spoken of contesting the elections alone.

Shah told party workers to not worry about an alliance and instead prepare to “root out” the opposition. “Nobody can beat the BJP, which has 11 crore workers. We shall fight and win all seats in Maharashtra. The party workers should work for the candidates with all their strength in the forthcoming elections,” he said.

“The BJP would put candidates even in seats contested by allies. So, I urge all party workers to get on the ground and commence preparations in earnest. It is not the job of a party worker to worry about alliances. These matters are the concern of the top brass. Our preparations must be to ensure that the party is victorious in at least 40 of the 48 seats,” Fadnavis said at the closed-door meeting .

Shah had reportedly told party MPs from the state last Thursday that they should be ready to contest the coming elections without an alliance.

“The arrogant statement by Amit Shah has exposed him and his party. By boasting about winning 40 Lok Sabha seats in Maharashtra, the BJP has announced its alliance with the EVMs. The Sena is ready to take on anybody if attacked. Maharashtra will see to it that you will be routed in the election,” a Shiv Sena spokesperson said.