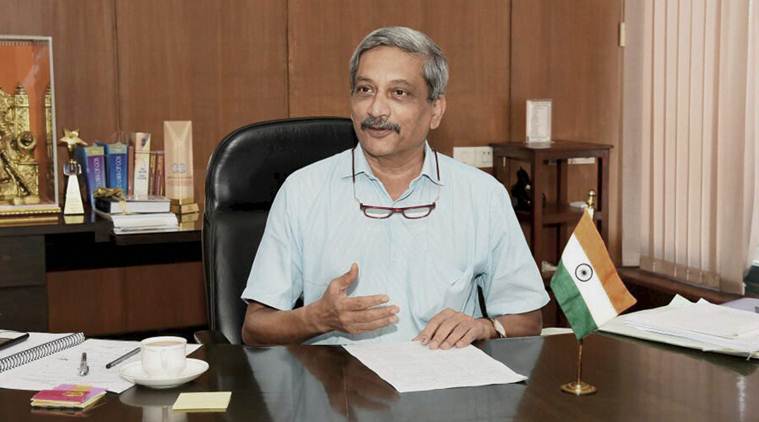 Ailing Goa Chief Minister Manohar Parrikar Sunday attended a public event for the first time since he was diagnosed with a pancreatic ailment last year when he turned up at the function to inaugurate a cable-stayed bridge on the Mandovi river, and charged up the audience with the popular dialogue from a Bollywood movie.

The 5.1 km long, four-laned “Atal Setu” was opened to public by Union Minister for Road Transport and National Highways Nitin Gadkari in presence of Parrikar, Union AYUSH Minister Shripad Naik and other ministers from the state.

The bridge has become the third such link over the river to connect Panaji with North Goa. Wearing a defence cap and medical appendage attached, Parrikar, 63, charged up the audience when he asked them “How is the Josh”, a popular dialogue from Bollywood film “Uri The Surgical Strike”, which has become popular with many politicians including Prime Minister Narendra Modi.

“How’s the Josh?, How is the josh?, How’s the Josh?. I will transfer my josh (enthusiasm) to you and sit here and speak a few words,” said Parrikar, 63, in his first ever public speech in the last one year.

The former defence minister has been in and out of hospitals in Mumbai, Delhi and the USA since February 2018. He has been recuperating at his private residence near here since October 14 last year, after he was discharged from the All India Institute of Medical Science (AIIMS) in New Delhi.

Parrikar could not attend the office of CM for long due to his illness. He has not attended any public events except visiting his office at the state secretariat late last year on few occasions. The frail-looking Parrikar was greeted with lusty cheers by people when he arrived for the inaugural event this evening.

The bridge is considered to be his dream infrastructure venture. During his brief speech, Parrikar lamented a social media “tendency” to oppose every developmental project in Goa. “There is opposition for airport and even to the garbage treatment plant. I think Goans should be positive,” he said.

The “Atal Setu” is expected to decongest Panaji, which receives approximately 66,000 vehicles every day, to a great extent.