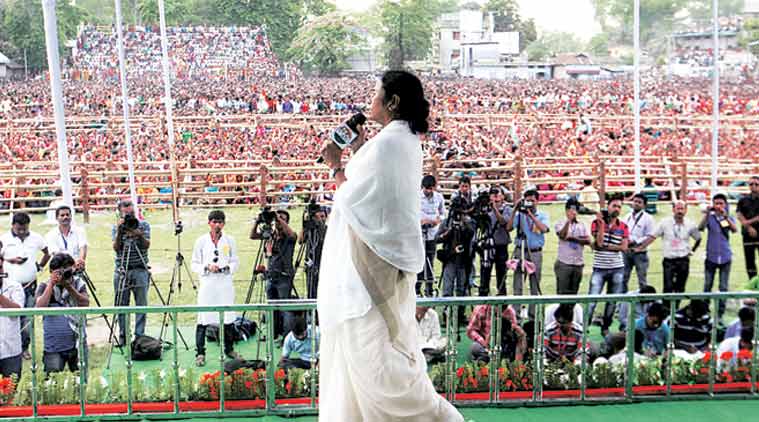 Leaders of 18 opposition parties, cutting across regional and ideological barriers, resolved on Saturday to put up united fight against the Bharatiya Janata Party (BJP) and oust it from power in the upcoming general election, as they staged a massive show of strength at Kolkata’s Brigade Parade Ground.

An estimated half-a-million people were in attendance at the rally — the biggest organised at the historic venue in recent years. Political leaders from 14 states shared the stage at the event, an initiative of West Bengal chief minister and Trinamool Congress leader Mamata Banerjee, which virtually kicked off the opposition’s election campaign.

“The BJP government has crossed its expiry date,” said Banerjee, who was the last to speak. Hardik Patel, a leader of the powerful Patidar community in Gujarat, Prime Minister Narendra Modi’s homestate, was the first to address the audience, which also heard BJP dissidents Arun Shourie, Yashwant Sinha and Shatrughan Sinha call for the ouster of the Modi government .

“Haven’t seen anyone run a country in a such a fascist manner,” said Banerjee, who ended her speech with the slogan “BJP hatao, desh bachao” (remove BJP, save the country), followed by “Jai Hind, Vande Mataram.”.

Congress veteran Mallikarjun Kharge, leader of the largest opposition party in the Lok Sabha, read out a letter from United Progressive Alliance (UPA) chief Sonia Gandhi in which she urged the people to save the Constitution and the basic ethos of the nation. Kharge represented the Congress at the rally in the absence of party president Rahul Gandhi.

Opposition leaders decided to hold at least two more such rallies — in Andhra Pradesh and Delhi — as the country prepares for the next general election, in which farm distress, lack of sufficient jobs for new entrants to the workforce, alleged wrongdoing in a Rs.59,000 crore deal for the purchase of Rafale fighter jets, and economic disruptions caused by the November 2016 invalidation of high-value bank notes and the July 2017 implementation of the Goods and Services Tax (GST) are looming as the major issues.

“A small group of leaders must immediately be formed to draft an election manifesto and policy document. Leaders must work on seat sharing in every state. This is a Herculean task and there is little time left. BJP is saying that this alliance has no leader or agenda… we must come up with a clear-cut programme to instill confidence among the people,” said Deve Gowda.

At the rally,,former Jammu and & Kashmir chief minister Farooq Abdullah labelled the EVM a “chor machine.”

The BJP on Saturday tried to appear unfazed by the show of Opposition unity.

”Is it a rally of ‘United India’ or of ‘Divided Leadership’?,” the party’s Rajiv Pratap Rudy asked journalists, asserting that the BJP will form the next government under Modi after winning the general election by a landslide. He termed the Kolkata rally a “summit of contradiction and conflicting ideologies”.

He also questioned who was leading the opposition’s conclave, ”Is it Mulayam Singh, Akhilesh Yadav, Mamata or who?”

Speakers at the rally including Banerjee, Akhilesh Yadav, Deve Gowda and Kejriwal said there was no need to speculate on a prospective prime ministerial candidate now and the need of the hour is opposition unity.

“Your party has become leaderless,” Banerjee said of the BJP. “Therefore, you have only one Prime Minister and one (party) president. We have a lot of leaders. Collective leadership is the base of our gathbandhan (alliance). We will sit together after the elections to choose the next prime minister.”

“The elections are going to be the second struggle for Independence,” remarked Dravida Munnetra Kazhagam chief MK Stalin.

“The purpose of this rally should be to prevent a split in opposition votes,” said Yashwant Sinha.