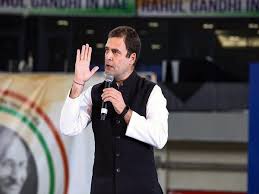 Hours after the Samajwadi Party and the Bahujan Samaj Party announced their alliance in Uttar Pradesh sans Congress for the 2019 Lok Sabha polls, Congress president Rahul Gandhi on Saturday said his party will fight the elections in the state alone with its “full capacity”.

Addressing a press conference in Dubai, Gandhi said that the leaders of the two parties “have a right to do what they want to do”.

“BSP and SP have made a political decision. It’s on us on how to strengthen the Congress party in Uttar Pradesh and we will fight with our full capacity,” he said, reported PTI news agency

“Congress party has tremendous to offer to the people of Uttar Pradesh… I have tremendous respect for the leaders of BSP and SP, they have a right to do what they want to do,” he added.

Once arch-rivals Samajwadi Party and Bahujan Samaj Party announced Saturday their tie-up in Uttar Pradesh for the 2019 Lok Sabha polls, sharing 38 seats each and keeping the Congress out of the alliance.

As the announcement came, the Congress prepared to go alone in the elections. However, the possibility of it taking like-minded smaller political groups along could not be ruled out.

A meeting of senior party leaders, office bearers and district and city unit chiefs has been convened in Lucknow on Sunday to give a final shape to the poll strategy and Rahul Gandhi’s tour programme across the state in next few weeks.

“The Congress president’s state tour will begin later this month. We are requesting him to begin from Lucknow and cover the entire state by next month. We discussed this with leaders of west UP on Friday and others have been called to Lucknow on Sunday,” said a senior party leader on condition of anonymity as Congress general secretary (incharge UP) Ghulam Nabi Azad will officially speak on the party’s view on the alliance and Rahul Gandhi’s proposed tour programmes soon.

“We knew this is coming. This is an opportunity to realise our true potential and may prove a blessing in disguise for us. The SP and BSP have underestimated the Congress. We may have won only 2 seats in 2014 Lok Sabha polls, but the party’s candidates did considerably well on many other seats. Moreover, we won 21 Lok Sabha seats in 2009 Lok Sabha polls on our own and this number reached 22 after the party won a by-poll. As 2019 Lok Sabha election will be a fight between the Congress and BJP, we will show our strength and win more seats than any party or alliance,” said the leader.

Taking a cue from Gandhi’s recent statement hinting that his party was ready to go all alone in 2019 Lok Sabha elections, senior party leaders had begun finalizing programmes for his tour across the state.

“Congress wanted to take all like-minded parties together. An alliance, however, cannot be forced on the parties that do not want to take others along. The BJP has failed to keep its promises and deliver the goods. This election will be fought on national issues. The SP and the BSP are only regional parties. So, the Congress will remain in the forefront of the fight against the BJP,” said another party leader.