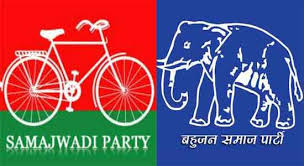 he alliance between the Bahujan Samaj Party and the Samajwadi Party in Uttar Pradesh for the 2019 Lok Sabha election will be formalised on Friday through a joint press conference by opponents-turned-allies Mayawati and Akhilesh Yadav.

The much-anticipated announcement will be at a neutral venue, the Taj Hotel, where Mr. Yadav had formalised a tie-up with Rahul Gandhi, then Congress vice-president, for the 2017 Assembly election.

While sources confirmed that the two leaders, both former Chief Ministers, would announce the deal, there was no word if a seat-sharing formula would be revealed at the time, as the alliance has other partners too, including the Rashtriya Lok Dal, to accommodate.

A Samajwadi Party leader said the two parties would get near “equal figures” in the seat-sharing arrangement, with the SP accommodating other allies like the Nishad Party.

A figure of 37 seats each out of the 80 in U.P. has been arrived at for the SP and the BSP, while two would be left for the Congress — Amethi and Rae Bareli.

Sources in the RLD said that its leadership was annoyed at not being invited to the press conference, wondering how a “mahagathbandhan” would take shape without it.

RLD president Ajit Singh cut short his programmes in Mathura and went back to Delhi to discuss the issue with party leaders, while his son and vice-president Jayant Chaudhary, who was scheduled to flag off a motorcycle rally in Lucknow on Friday at the time of the SP-BSP press conference, also cancelled his participation, sources said.

The party is also bargaining for more seats. While it is keen on contesting five seats, including Mathura, Muzaffarnagar and Baghpat, the SP chief has promised it only three so far.

Earlier, talking to reporters in Mathura, Mr. Ajit Singh stressed that his party was “part of the mahagathbandhan” but said no talks on seats were held yet when asked if the RLD had got only two seats.

He also said he had no idea about Saturday’s press conference. The party is also in touch with the Congress, even though RLD leaders believe that the alliance with the SP and the BSP will come through, even if they have to settle for four seats. Soon after invites were sent for the press conference, Mr. Akhilesh Yadav while interacting at an e-chaupal in Kannauj, from where he is likely to contest the Lok Sabha poll, justified the alliance, saying that he had finally “found the glue” required to shore up the “ginti” (numbers), an allusion to arithmetic and social engineering.

“The BJP taught us how to do ginti (arithmetic),” said Mr. Yadav, claiming that despite having a superior record on development, his party had lost out on the arithmetic.

A result of this strategy was seen in Gorakhpur, Phulpur and Kairana where the BJP lost its in by-polls as the grand-alliance tested waters successfully.

Mr. Yadav said the number of alliances stitched up by the BJP to win elections had gone unnoticed.

“Even now there is a perception they are very strong. This is because they have regional leaders from other parties with them But these parties are deserting them now,” said Mr. Yadav.