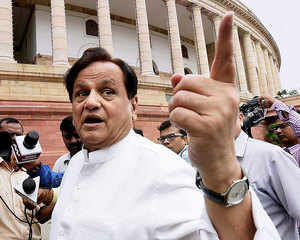 Hours after BJP announced an alliance with Shiv Sena for the upcoming parliamentary polls, Congress MP Ahmed Patel questioned if the tie-ups were a part of BJP’s “mahamilawat” (severe adulteration) or formed out of “mahabhay” (biggest fear).

The BJP and the Shiv Sena, despite open differences, on Monday announced that they will be fighting the 2019 Lok Sabha and the state assembly elections together.

Hitting out at BJP over another alliance, Patel said, “First Bihar, then Maharashtra and now Tamil Nadu. BJP has been forming alliances one after the other. The mahasawal (biggest question) is — is it mahamilawat (severe adulteration) or mahabhay (biggest fear)?”

The BJP is set to announce a pre-poll alliance with AIADMK and a few other regional outfits in Tamil Nadu soon. The speculations began after Union minister Piyush Goyal held midnight parleys with chief minister EK Palaniswami and his deputy O Panneerselvam three days ago.

It had earlier announced a tie up in Bihar for the forthcoming Lok Sabha elections, accommodating two of its key allies, the Janata Dal (United), or JD(U), led by chief minister Nitish Kumar and the Lok Janshakti Party (LJP) led by Union minister Ram Vilas Paswan.

Patel had recently hit out at the ruling BJP over disruptions in Parliament. He assured that “in the 17th Lok Sabha, which will be dominated by the Congress, such undemocratic practices shall have no place”.