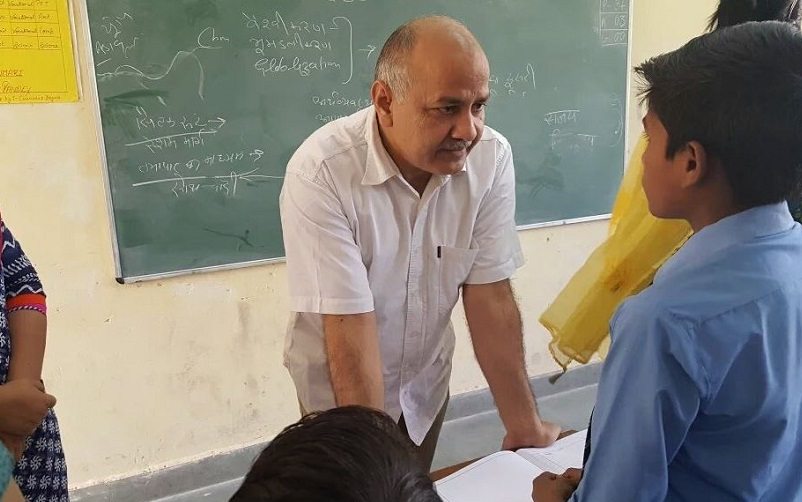 New Delhi:For the upcoming national election, due in a few months, the BJP and Arvind Kejriwal’s Aam Aadmi Party (AAP) are using “education” as the pitch to play a contest in T20 style in Delhi. The Congress is also trying to woo the voters saying the former Chief minister of Delhi, Sheila Dikshit gave the government schools modern textbooks. In this battle, the National Commission for Protection of Child Rights (NCPCR) has swung into action as the referee.

Last week, the AAP chief had asked for votes while inaugurating 1,100 new classrooms in government schools in Delhi and that upset the NCPCR.

“Children are the future of the country. At this stage of their lives, you can’t influence them politically, that is what the Aam Aadmi Party has done. A chief minister gives political speeches in classrooms and asks kids to tell their parents to not vote for Narendra Modi… It is a crime to drag young minds into politics,” said Manoj Tiwari, the President of Delhi BJP.

However, the Aam Admi Party is unfazed.

The AAP claims no one has done for education in Delhi what they have. And the students and teachers vouch for their claims. “My folks are not educated enough to steer me in the right direction. Having come here I got to know if my ranking is not good enough this year, maybe it is better to reappear next year and get good grades,” says Mohit Jhindwan, a Class 11 student from a Delhi government school, at a two-day career fair in the city.

The Career Fair, the AAP’s reach out to students, had 71 participants, including the armed forces, colleges from NCR and other technical training institutes.

“We give 100 per cent credit to the government for organising something like this. They are students of a government school, but here the whole world has opened up for them,” says Anupam Sethi, a teacher.

In the last four years the Delhi government has constructed 21 new schools, 8,213 new classrooms and added 7,000 teachers. The changes have brought over 34,000 students to these schools during this period.

“These are the students who have been studying in Delhi government schools which have been neglected for decades by different governments. Now that the infrastructure has improved, it is changing the lives of the students. So the reality is that education is related to the electoral choices of people of Delhi,” added Ms Marlena.

The BJP doesn’t want to be left behind. While the Delhi government schools are run by AAP, the BJP runs the SDMC schools in the national capital. They are also claiming that their focus on education beats the other parties, even as they criticise the AAP for using schools for political campaigns.

The BJP has rolled out the SDMC’s first model primary school building. The SDMC will build 39 similar schools in the first phase out of 100 smart schools in its all four zones. Currently, there are 2.4 lakh students in the 581 primary schools run by the SDMC, which includes 1.1 lakh boys and 1.2 lakh girls.

They are looking to build English medium schools, where foreign languages will be taught with the help of NGOs. They have already garnered British Council and French Government’s support.