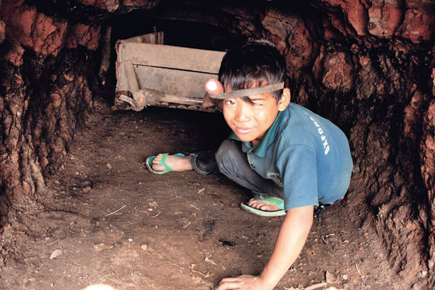 Thirty two days after they fell inside the illegal rat-hole coal mine in Meghalaya’s East Jaintia Hills district, the body of one labourer among 14 others has been located, according to sources.

In a big breakthrough by rescue teams, including the Indian Navy and the National Disaster Response Force (NDRF), the body of a miner was detected deep inside the mine on Tuesday with the help of one Underwater Remotely Operated Vehicle used by the navy divers for searching objects underwater.

Interestingly, the water level inside the more than 350-feet deep mine remains same, even as crores of litres of water has been pumped out till now with effective high power pumps. Ten 63 Horsepower pumps were brought in by the Odisha Fire Rescue team that were made operational with much difficulty. The UWROV used by Indian Navy had also got stuck inside the mine several times.

The body has been located after 20 days since the multi-agency rescue operation began only on the 16th day of the incident. The tragedy took place on December 13, 2018, when a group of labourers went down the rat hole coal mine, not apprehending the danger. While four of them managed to survive, 15 others remained trapped as river water gushed inside.

Anxious family members had since been waiting for news – some of them who visit the site daily are even helping in the rescue operation. Sources said the few survivors provided vital clues in establishing where the miners could be.

The NDRF team, along with help from SDRF and civil administration, was the first to start the rescue operation the next day of the incident. However, because of lack of available resources and heavy duty pumps, work was stalled after a few days.

The NDRF had ensured that there was no one in the main shaft of the mine though it was impossible for the Navy and NDRF divers to go to the desired depth without a drop in the water level to at least 30 metres. Without a map or blueprint, the greatest difficulty was to ascertain where the miners could be and in which direction inside an unregulated and unscientific mine.

Rescue teams would now look for ways to retrieve the body to the surface as early as possible.