The German designer, who was the creative director for Chanel and Fendi, was one of the industry’s most prolific figures and worked up until his death.

His signature ponytail and dark glasses made him an instantly recognisable figure around the world.

“Today the world lost a giant among men,” said the editor-in-chief of Vogue magazine, Anna Wintour.

Lagerfeld’s website says his year of birth was 1938 – though most placed his age at five years older.

Rumours of Lagerfeld’s ill health had swirled for several weeks after he missed a number of events – including Chanel’s spring/summer show last month. 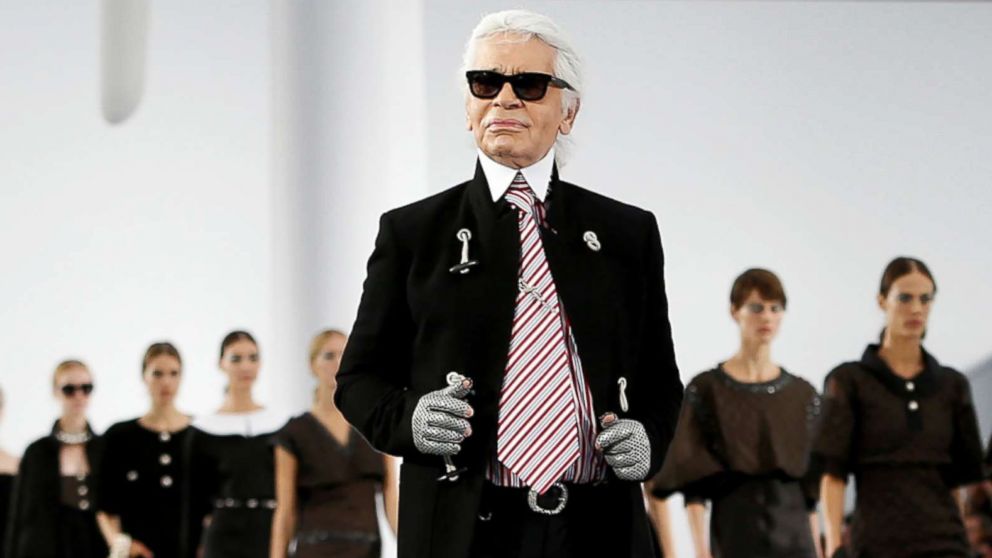 >
He died on Tuesday morning after being admitted to hospital the night before, French media report.

As a designer he transformed the fortunes of Chanel, one of the leading names in high fashion, but his work also filtered down to the high street.

Away from his work, Lagerfeld made headlines for a range of provocative, and sometimes offensive, statements.

Who has paid tribute?
Members of the fashion industry have been lining up to praise Lagerfeld’s work.

Donatella Versace said his genius had “touched so many” and was a source of inspiration for her and her late brother.

Karl your genius touched the lives of so many, especially Gianni and I. We will never forget your incredible talent and endless inspiration. We were always learning from you.

“Karl was brilliant, he was wicked, he was funny, he was generous beyond measure, and he was deeply kind. I will miss him so very much,” her statement went on.

The model, Claudia Schiffer, said: “What Warhol was to art, he was to fashion; he is irreplaceable. He is the only person who could make black and white colourful.”

Chanel’s chief executive, Alain Wertheimer, credited Lagerfeld with transforming the brand after he joined in 1983.

“Thanks to his creative genius, generosity and exceptional intuition, Karl Lagerfeld was ahead of his time, which widely contributed to the House of Chanel’s success throughout the world,” he said in a statement.

Today the world lost a creative genius. We will miss you Karl! #RIPKarlLagerfeld pic.twitter.com/8MMcWqDphE

New life at Chanel
He was born Karl Otto Lagerfeldt in pre-war Germany in the 1930s.

Lagerfeld changed his original surname from Lagerfeldt, because he believed it sounded “more commercial”.

He emigrated to Paris as a young teenager, and became a design assistant for Pierre Balmain, before working at Fendi and Chloe in the 1960s. 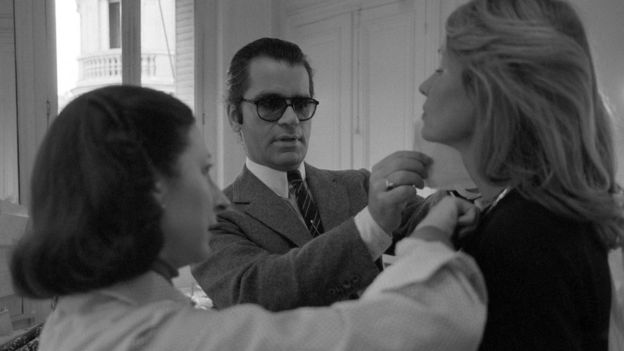 But the designer was best known for his association with the French label Chanel.

He began his long career with the fashion house in 1983, a decade after Coco Chanel died.

Lagerfeld’s designs brought new life to the label, adding glitz to the prim tweed suits the couture house was known for.

The designer worked tirelessly, simultaneously churning out collections for LVMH’s Fendi and his own label, up until his death.

Lagerfeld was known to encourage new designers, like Victoria Beckham – who has praised him for his kindness.

So incredibly sad to hear this. Karl was a genius and always so kind and generous to me both personally and professionally. RIP 💔x vb

Lagerfeld’s own look became famous in his later years – wearing dark suits and leather gloves with a signature white pony-tail and tinted sunglasses.

Despite his age and decades within the industry, the designer remained prevalent within popular culture – appearing in 2015 as a character in Kim Kardashian’s Hollywood smart-phone game.

Lagerfeld’s beloved pet cat Choupette, whom he doted on, has a cult following of her own online. 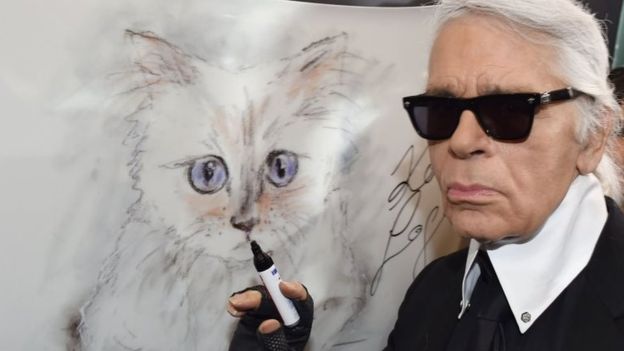 Questions about her fate have become a talking point on Twitter following the news of the designer’s death.