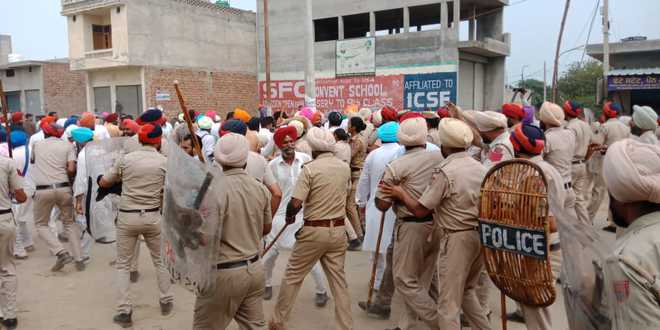 One person died in poll-related violence, while skirmishes were reported from different districts as polling for panchayat polls was held in Punjab Sunday.

A ballot box was set on fire and a voter was allegedly crushed to death by miscreants under their vehicle at village Lakhmir Ke Hithar in Ferozepur district. In Jalalabad, brother of a candidate allegedly poured acid on a ballot box at village Jhuge Tek Singh. Meanwhile, some unidentified persons opened fire in air at Dina Sahib in Nihal Singh Wala of Moga.

In Ferozepur, a group of 8-9 persons arrived in an SUV and allegedly barged into a polling booth at village Lakhmir Ke Hithar and set a ballot box on fire.

Soon, a clash broke out between two groups- consisting of supporters of both Congress backed candidates. The village had two candidates for sarpanch post and both are backed by Congress.\ Both groups started pelting stones and bricks at each other. Police said that the group of miscreants who had put ballot box on fire were trying to flee when they allegedly crushed a voter Mahinder Singh (60) under their vehicle. He died on the spot. The miscreants also allegedly attacked cops who were on duty. The polling was suspended in the booth which had 264 votes.

Ferozepur SP (Investigation) Baljit Singh said that two FIRs were registered at Mamdot police station — one for murder and another for booth capturing — against eight persons, most of them have been identified and raids are being conducted to arrest them. The FIR in the death of voter Mahinder Singh was registered under the Sections 302 (murder) and 34 (act done by several persons with common intention) of IPC on statement of brother of deceased.

The second FIR for booth capturing was registered under the sections 171-F (undue influence or personation at an election), 436 (mischief by fire or explosive substance), 452 (trespassing), 379-B (snatching), 186 (obstructing public servants in discharge of duty), 148 (rioting) and 149 (unlawful assembly) of IPC and sections 135-A (booth capturing) and 123 (corrupt practices during election) of the Representation of the People Act.

“Most of the accused are from this village only and we will arrest them soon. They crushed Mahinder Singh under their vehicle intentionally. We have booked them for murder,” said SP. The administration also announced compensation of Rs 1 lakh for family of deceased. In another incident, brother of a candidate poured acid in a ballot box at village Jhuge Tek Singh of Jalalabad in district Fazilka. Police said that Balwinder Singh, whose brother Jaswinder Singh was contesting sarpanch polls, allegedly poured acid in ballot box damaging around ten polled votes. He was arrested from the spot and an FIR against him was being registered at Jalalabad Sadar police station till filing of this report. The accused is said to be affiliated with Shiromani Akali Dal (SAD).

Some unidentified persons also opened fire in air at Dina Sahib of Nihal Singh Wala in Moga. They came on motorbikes and fled after firing nearly four rounds in the air. SSP Gulneet Singh said that no one was injured in firing but villagers were in panic as polling was ongoing. However, polling was not affected. He added that FIR was registered against unidentified persons at Nihal Singh Wala police station.