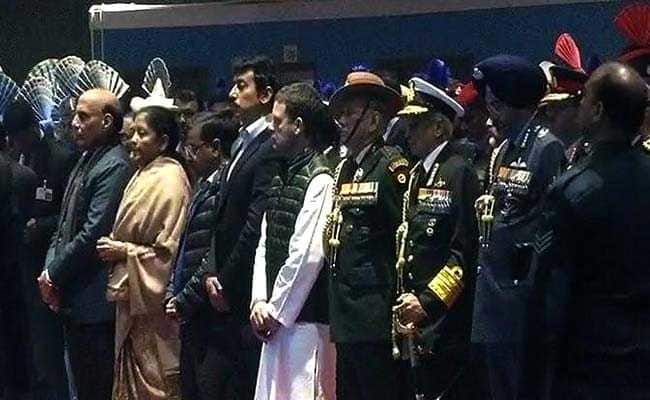 New Delhi: Prime Minister Narendra Modi, Union ministers Rajnath Singh, Nirmala Sitharaman, along with Congress president Rahul Gandhi and Delhi Chief Minister Arvind Kejriwal paid tributes to the 40 CRPF soldiers at the Palam airport in Delhi this evening, as their bodies arrived from Pulwama in south Kashmir. The PM and other leaders laid the wreath on the coffins, wrapped in the national flag.

The bodies of the soldiers – killed in an attack by Pakistan-based terror group Jaish-e-Mohammed – were brought to Delhi in a C-130J Super Hercules aircraft today. The bodies will be sent to their respective cities tomorrow.

Shock, grief and outrage have engulfed the country after the deadly attack on Thursday in which a terrorist rammed buses in a security convoy on the Jammu-Srinagar highway with a car carrying 60 kg of explosives.

PM Modi today warned that those responsible for the attack had made a “big mistake” and would pay a “very heavy price”. In hard-hitting comments at an official event, PM Modi said security forces had been given a free hand to act against terror.

At a meeting this morning of the Cabinet Committee on Security at Prime Minister Narendra Modi’s home, the government also scrapped ‘Most Favoured Nation’ status for Pakistan, which was never reciprocated.

India had last evening appealed to all members of the international community to “support the proposal to list terrorists, including JeM chief Masood Azhar, as a designated terrorist under the 1267 Sanctions Committee of the UN Security Council and to ban terrorist organisations operating from territories controlled by Pakistan”, a clear reference to China which has been blocking all efforts to listing Masood Azhar as a global terrorist by the UN Security Council.

This is the worst terror attack to take place in Kashmir since the start of the century. On October 1, 2001, three terrorists had rammed a Tata Sumo loaded with explosives into the main gate of the Jammu and Kashmir State Legislative Assembly complex in Srinagar, killing 38 people. In 2016, the army had carried out a cross-border surgical strike and destroyed several terror launch pads after 19 soldiers were killed in an attack on an army brigade headquarters in Uri.