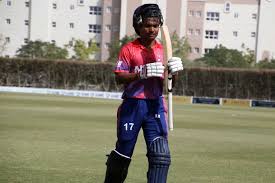 It was a record-breaking day for Nepal’s Rohit Paudel as he not only broke Shahid Afridi’s record and became the youngest batsman to register a fifty in ODIs but also broke the international record by a male batsman, which was previously held by Sachin Tendulkar.

However, he fell well short of the international record, which is held by South Africa’s Johmari Logtenburg, who hit both Women’s Test and Women’s ODI fifties as a 14-year-old.

Not only did the 16-year-old score his maiden ODI fifty in only his third match, but his 58-ball 55 also helped him finish as the side’s highest scorer in the second ODI as Nepal finished on 242/9 after winning the toss and electing to bat first.

Nepal are 0-1 down in the series but are in a good position to level things up courtesy of Paudel’s rescue act, having come in at No.7 with the score at 113/5. After stitching a crucial fifty partnership with Aarif Sheikh for the sixth wicket, he took the total past 200 before being dismissed.