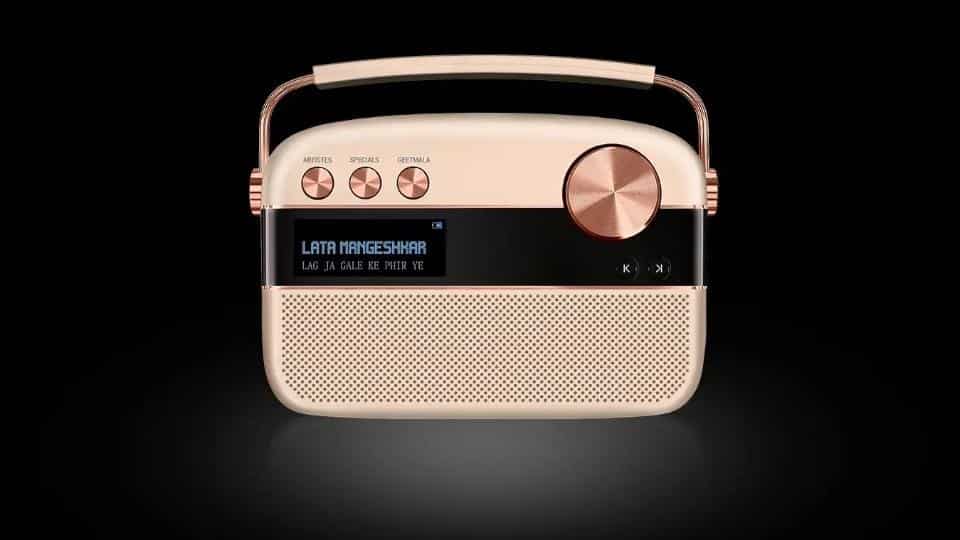 Saregama’s Carvaan series of Bluetooth speakers have become quite rage in India. The speakers stand out for their unique retro look, evoking a sense of nostalgia. But you get all of these without compromising on modern features.

The latest offering from Saregama is Carvaan Gold. Powered by Harman Kardon speakers, Carvaan Gold is available for Rs 14,990. An upgraded version of the popular Carvaan Premium, the latest version comes with better speakers and design.

The digital audio player is available on Saregama’s e-store and online platforms like Flipkart and Amazon India.

Carvaan Gold stands out for its design. It looks similar to the classic transistors with antennas. The peppy gold and rose gold finish makes it more unique. While it does look good, the same cannot be said about the build quality. The plastic material on the device feels little cheap and prone to dents.

Staying true to the retro theme, Carvaan Gold also supports FM and AM radio with retractable antennas. These antennas can also be moved to adjust the tuning, as you would do on an old transistor or portable radio.

The tuner up front may be mistaken for a volume button which actually resides on the right side. The volume button was not user-friendly during my usage. Just below this is the 3.5mm headphone jack.

The controls for switching to Bluetooth, FM, Saregama and USB are placed on the left side. There’s an LED display on top which shows the song being played. Speaking of which, Carvaan Gold comes loaded with 5,000 songs ranging from artists like Kishore Kumar, Lata Mangeshkar, R.D Burman and the likes. You can shuffle through the songs by stations which are categorised based on lyricists, actors, singers and more.

Saregama claims five hours of playtime on the Carvaan Gold after a full charge. During my usage, the Carvaan Gold lasted for more than five hours although I did not use it continuously for five hours as claimed. In terms of sound quality, the Harman Kardon speakers as expected are great. There are two 5W speakers which work perfectly not just for old songs but for roughly any music genre.

Surprisingly, the Carvaan Gold works really well for an electric guitar setup. Its frequency response was great through lows, mids and highs. The mid response also helps the instrument shine.